A Simple Introduction to Cognitive Biases

This article is an excerpt from my book The Decision-Making Blueprint.

It’s been estimated that the human brain can make roughly a billion billion calculations per second. That’s far more than any computer that exists today.

In fact, it took one of the world’s most powerful supercomputers—housing 705,024 processor cores and 1.4 million gigabytes of RAM—40 minutes to simulate just one second of thinking.1

But despite its impressive capacity, the brain still makes systematic mistakes.

We all have inherent thinking errors in the way we perceive, process, and interpret information from the world around us.

Psychologists refer to these errors as cognitive biases: “a systematic pattern of deviation from norm or rationality in judgment.”2

The world is an extremely complicated place, and cognitive biases are often a result of your brain’s attempt to simplify the input it’s receiving.

But they can also be problematic. At times, they lead to perceptual distortions, inaccurate judgment, and irrational decisions.

A fascinating study by researchers Eric Johnson and Daniel Goldstein3 provides a great example of how cognitive bias can affect our choices—without us even realizing it. Let’s have a look at it. 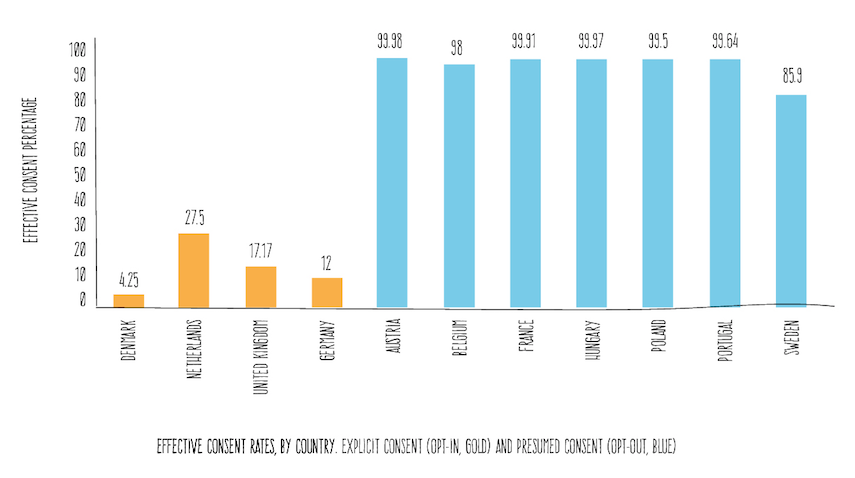 This graph shows the percentage of people across several European countries who are willing to donate their organs after they die.

Note the massive difference between the countries on the left and the ones on the right. Why do you think that is?

At first glance, you might assume some major underlying factor like culture or religion caused these results, but at a closer look, that doesn’t hold up.

Denmark and Sweden, the Netherlands and Belgium, Austria and Germany—these are all countries with similar cultures and religious beliefs.

What explains the differences between the countries is the design of the form related to organ donations in each region.

In the countries where the form has an “opt-in” design (i.e., “Check this box if you want to donate your organs”), people tend not to check the box.

And in the countries where the form has an “opt-out” design (i.e., “Check this box if you don’t want to donate your organs”), people also tend not to check the box.

No matter which one of these forms people are presented with, an overwhelming majority of them will choose the default option.

When you decide whether to donate your organs, you may feel like you’re making a deliberate choice. But in reality, you’re much more likely to choose whatever is presented as the standard choice.

This is known as the default effect, and it’s just one example of how cognitive biases can affect our decisions. In the articles below, you’ll discover many more.

It’s important to note that you can’t completely rid yourself of cognitive biases. That’s not possible, nor desirable.

Cognitive biases have evolved for a reason. They are hardwired into your brain because you need them to navigate the world.

But what you can do is use debiasing to reduce the influence of biases in your judgment and decisions. That can be very helpful, especially when it comes to particularly important decisions.

So, in the articles below, I’ll cover the most common cognitive biases and what you can do to decrease their effects.

I hope you find them insightful! 🙂