Habit Tracking: A Simple Tool to Help You Achieve Your Goals

Are you familiar with comedian Jerry Seinfeld’s “Don’t break the chain” strategy? If not, I’ll quickly share the story about it.

Years ago, when Seinfeld was still a new television show, a young comedian named Brad Isaac was starting out on the comedy circuit.

One night, the story goes, Isaac happened to be in the same club as Seinfeld. And in an interview on Lifehacker, Isaac shared what happened when he met Seinfeld backstage and asked if he had any advice for a young comic.

Here’s how Isaac described his interaction with Seinfeld:

“He said the way to be a better comic was to create better jokes and the way to create better jokes was to write every day. He told me to get a big wall calendar that has a whole year on one page and hang it on a prominent wall. The next step was to get a big red magic marker. He said for each day that I do my task of writing, I get to put a big red X over that day. After a few days you’ll have a chain. Just keep at it and the chain will grow longer every day. You’ll like seeing that chain, especially when you get a few weeks under your belt. Your only job is to not break the chain.”

If you’ve already heard about “Jerry Seinfeld’s productivity secret”1, that’s no surprise. It’s been references to time and time again in articles, magazines, and books.

But according to Jerry Seinfeld himself, he didn’t come up with this strategy. In an “Ask Me Anything” session on Reddit, he commented2:

I find it funny that Seinfeld’s productivity secret apparently had nothing to do with Jerry Seinfeld. But I don’t agree that it’s a “stupid non-idea”. In fact, I think it’s quite the opposite.

Measuring your behavior is one of the easiest ways to change it. Research shows that merely asking people to track what they do immediately and significantly improves their performance in that area.

For instance, studies show that people who use pedometers will increase their physical activity by 27%, and result in them walking at least one extra mile per day on average3.

What gets measured gets improved. And the “Don’t break the chain strategy” provides a simple and effective way to measure what you do. So, any time you’re creating a new habit, I highly recommend tracking your progress in a habit calendar: 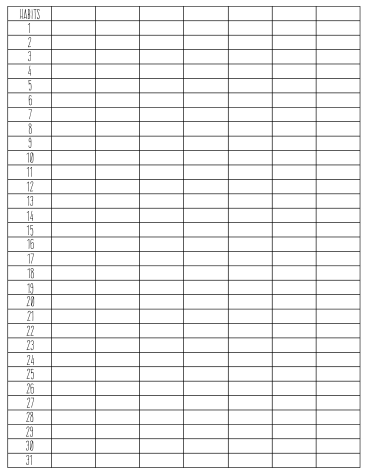 Write the habits you want to track in the top row and put the calendar on a wall where you’ll see it often. Then check off each habit after you’ve completed it.

That way, you’ll create a visual representation of your progress that can work as a powerful motivator. And, perhaps more important, you’ll collect valuable data that you can use to analyze your results and improve your approach.

Thank you, Sarah Moore, for creating the habit calendar in this article.