This is How to Get Better at What You Do, Every Single Day

by Patrik Edblad
in Personal Development

I talk a lot about the importance of starting small when you’re just getting started with a new habit.

And this is indeed an important and very powerful strategy for establishing a new behavior.

Starting small allows you to get out of your head and start building the momentum necessary to make the habit stick.

But once your new behavior is a reliable part of your daily routine, it’s equally important to increase your efforts to get better at what you do.

The Process of Supercompensation

In sports science theory, there is a fundamental principle of athletic training known as “supercompensation” (how’s that for a badass word?).

This concept refers to “the post-training period during which the trained function/parameter has a higher performance capacity than it did prior to the training period”.1

The idea is that since the human body is an adjustable organism, it will not only recover from the exercise. It will also adapt to the new strain placed on it and get a little bit stronger than it was before: 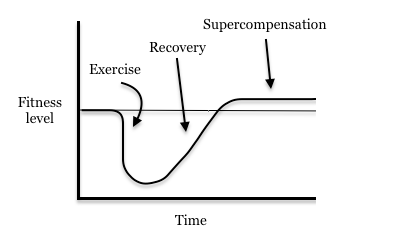 But the thing is, supercompensation will only occur if you increase your efforts to a level that is higher than your body is already used to.

And this is, unfortunately, where a lot of people get it wrong. According to sports scientist, the most common mistake regular exercisers make is doing the same workout over and over again.

When you do that, there’s no new level of strain for your body to adapt to and because of that, no supercompensation will occur: 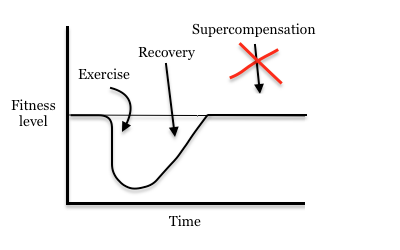 Albert Einstein once said that “the definition of insanity is doing the same thing over and over again, but expecting different results.”

So, if you want your fitness level to improve, you can’t settle for running the same trail at the same intensity week in and week out. That would be NUTS. Hey, it was Einstein who said it2. Not me.

For supercompensation to occur, you need to consistently push yourself to run a little bit faster or longer than what you’re already used to.

How to Get Better at What You Do, Every Single Day

And the concept of supercompensation isn’t just helpful for fitness. In fact, it’s a very useful concept for any positive change you’re trying to create:

You get the idea. Once your habit is up and running, don’t settle for putting in the same amount of effort every day. If you do, your growth will quickly plateau.

Instead, always look for ways to raise the bar just a little bit and push yourself to get better at what you do.

If you can do that, your consistent, tiny improvements will lead to massive results over time.

Let’s get our supercompensation on! Where will you get started?