This is the 1 Thing Successful People Do Differently

by Patrik Edblad
in Self-Discipline

In the late 1960’s and early 1970’s, psychologist Walter Mischel explored the self-control in children with a simple but effective test (1).

He and his researchers began their experiments by presenting a preschooler with a plate of treats such as marshmallows.

The child was then told that the researcher had to leave the room for a couple of minutes. Before they left, they gave the child the two options:

”If you wait until I come back you’ll get two marshmallows. If you can’t wait, you can ring a bell and I will come back immediately, but then can only have the marshmallow in front of you”.

Mischel’s ‘marshmallow test’ laid the groundwork for the modern study of self-control and it has been replicated many times over.

And the results are always fascinating.

What Marshmallows Can Teach Us About Success

The purpose of the experiment wasn’t to study the children’s strategies to resist the marshmallow. Although it does provide some pretty great entertainment. 🙂

It wasn’t until years later when Mischel revisited the children in his study that he got his results and made a groundbreaking insight.

When interviewing the participants, who were now in their teens, he found that those who had waited longer in the marshmallow test were more likely to have higher grades in school.

Their parents also rated them better at planning, handling stress, having self-control in frustrating situations, and concentrating without getting distracted.

It turned out that Mischel’s simple marshmallow test in many ways could predict how successful the children would be later in life (!!).

The 1 Thing Successful People Do Differently

In 1940, insurance industry executive Albert E.N. Gray gave a speech that has since become very popular (2).

In his speech, Gray tells the story of how he wanted to find out what makes successful people successful.

In fact, he wanted it so badly that he set out on a decade-long quest to find the answer.

He began by reviewing the research on topics like motivation, behavior, performance, and job satisfaction.

Next, he read thousands of books, magazines, and biographies.

And finally, he spent over 20 years conducting empirical research on the subject.

What all this searching taught him came down to the following:

“The common denominator of success — the secret of success of every person who has ever been successful — lies in the fact that they formed the habit of doing things that failures don’t like to do.”

This is exactly what the kids in the marshmallow experiment were doing.

The ones who could successfully resist the urge to eat their marshmallow (doing what others don’t like to do) ended up more successful.

That is the 1 thing successful people do differently — they suffer now, so they get to spend the rest of their lives as champions.

And because of this they consistently make progress by pushing through where everyone else gives up.

Tearing Down the Brick Walls

Randy Pausch was a professor of computer science at Carnegie Mellon University (3).

In 2007, he was given a terminal pancreatic cancer diagnosis. Before he passed away, he gave a fantastic lecture called “The Last Lecture: Really Achieving Your Childhood Dreams” (4) where he gave the following advice:

Whenever I get stuck in my writing, tired in a workout session, bored while meditating, or resist some tedious business task, I try to remember these wise words.

This discomfort, this obstacle, this brick wall is just another opportunity for me to do the 1 thing successful people do differently.

This is my chance to do what other people don’t like to do.

And for every brick wall I tear down, I get a little stronger. Every pile of bricks I leave behind makes me more confident I can take down the next wall in my path.

Each one of these ‘shoulds’ represents a glowing opportunity for you to start doing the 1 thing successful people do differently.

Which brick wall will you tear down first? 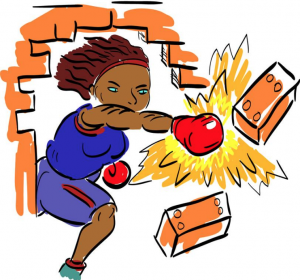