This is How to Overcome Perfection: The Power of “The Shitty First Draft”

by Patrik Edblad
in Self-Discipline

In her excellent book, Bird by Bird: Some Instructions on Writing and Life (1), author Anne Lamott writes:

“(…) Shitty first drafts. All good writers write them. This is how they end up with good second drafts and terrific third drafts.

People tend to look at successful writers who are getting their books published and maybe even doing well financially and think that they sit down at their desks every morning feeling like a million dollars, feeling great about who they are and how much talent they have and what a great story they have to tell; that they take in a few deep breaths, push back their sleeves, roll their necks a few times to get all the cricks out, and dive in, typing fully formed passages as fast as a court reporter.

But this is just the fantasy of the uninitiated. I know some very great writers, writers you love who write beautifully and have made a great deal of money, and not one of them sits down routinely feeling wildly enthusiastic and confident. Not one of them writes elegant first drafts. (…)”

The Power of Shitty First Drafts 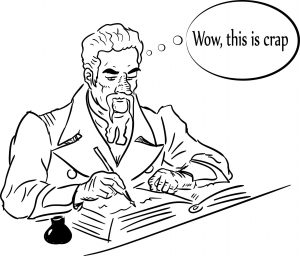 I’ve found this idea of shitty first drafts very helpful in my writing. Before I started writing shitty first drafts, I’d waste tons of time and effort crafting the next sentence in my text. And when I’d finally move forward in the text, I’d often end up scrapping the sentence anyway since it didn’t fit well in the context of the paragraph.

As a result, more often that I’d like, my total word count would add up to a grand total of zero (or even -200 or so, if I felt the need to edit some words from the day before). As you can imagine, this was not a very exciting nor motivating way to work.

Allowing myself to write shitty first drafts helped me get rid of this problem. And as a result, I’m now able to write 1,000+ words every day.

How to Overcome Perfection in All Areas of Life

I have been thinking a lot about the shitty first draft concept lately, and I’m convinced it’s not only helpful for writers.

No matter what you’re trying to achieve, you need to consistently put in the effort to get there.

Because it’s only when you get out of your head and start taking action that you’ll start building the necessary momentum to reach your goal. 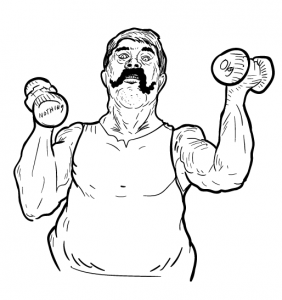 You get the idea. Instead of overwhelming yourself with the high-level stuff, just do one shitty thing, and do it NOW.

The reason this idea is so powerful is that it allows you to lower your expectations so you can stop thinking and start doing. And nothing cures perfectionism like good ol’ action-taking.

The real power in the shitty first draft mindset comes from executing on it consistently. That’s because when you start racking up shitty actions on a daily basis, you allow the compound effect to get to work. And once you’ve got some serious momentum going it will be harder to stop than to keep going.

With enough repetition, your efforts will start feeling a lot less shitty. In fact, they’ll start feeling perfectly fine. In some cases, even pretty good. And when this starts happening, you’ll naturally develop the sense of competence necessary to get really, really good at what you do.

And from this point forward, it’s only a matter of time before you reach your goal.

But always remember that it all starts with that shitty first draft. So, whenever you start feeling overwhelmed, forget about the results and focus on the process instead.

If your mind starts telling you that what you’re doing isn’t good enough, remember that this is the shitty first draft. It’s SUPPOSED to be bad. And know that the quality will come later, but only if you focus on the quantity first.

Now, figure out what shitty little action you could take right now and go do it. Your future self will be grateful you did.

Joel Lindmark (Society 6), for creating the images in this article.